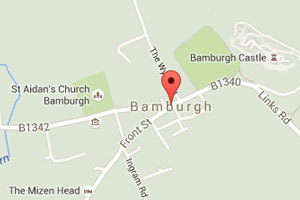 Bamburgh is set in beautiful Northumberland countryside, approximately midway between Berwick upon Tweed and Alnwick (and some sixteen miles from both).

BY CAR Travelling northbound on the A1 turn off at Adderstone services and follow the B1341 Bamburgh is about 5 miles or you can take the B1342 if travelling southbound. Alternatively the B1340 coastal road that takes you on a more Leisurely route directly into Bamburgh.

BY AIR The nearest airport is at Newcastle call 08718821121 or www.newcastleairport.com

Getting here by Bus

Bamburgh is very well served by local buses. During the summer there is an hourly daytime service in each direction and a two-hourly service on winter days. We reccomend using Traveline (http://jplanner.travelinenortheast.info/) to plan your journey.

Arriving from Berwick and the north

Catch the Arriva X18 from Berwick direct to Bamburgh or

Arriving from Newcastle, Alnwick and the south

Arriving from the coast

From the coastal villages of Alnmouth (X18 only) Craster, Newton (418 only), Beadnell and Seahouses catch either a X18 or 418 bus to Bamburgh

Getting to Holy Island

Holy Island is served by the Perryman’s 477 service. From Bamburgh, passengers must catch the Arriva X18 and change at Beal Filling Station. Because the causeway to Holy Island is tidal, the timetable changes virtually daily. Perrymans operate the 477 service between Berwick-upon-Tweed and Holy Island. Outside of the summer season this bus only operates on Wednesdays and Saturdays. During summer and Easter school holidays there is a twice-a-day Monday to Saturday service.

Travelling around by bus

Chathill is the nearest station to Bamburgh but is only served by a very early morning train and and late evening train. Most rail passengers will need to alight at Berwick or Alnmouth.

LNER from London, Peterborough, Doncaster, York, Newcastle and Scotland call at both Alnmouth and Berwick-upon-Tweed.

CrossCountry trains from South West England, the Midlands and Scotland also call at both Alnmouth and Berwick-upon-Tweed.

DFDS Ferries connect the North of England at Port of Tyne to Amsterdam (IJmuiden) in Holland.

To travel from Port of Tyne to Bamburgh without a car, passengers should use the DFDS shuttle-bus service to Newcastle Central Station and then use either the train or Arriva Coast and Castles Connection X18/X15 services to get to Bamburgh