In the year 1393 two of the main wells supplying the village dried up, leaving a well in the grounds of the Dominican Friary as the most convenient source of water.

However, the friars were in dispute with the villagers and denied them the use of the well. One day Jane Boys, a local woman, who was pregnant at the time, stopped by the well and drank from it.

The next day she gave birth to a dead child. It was then discovered that the friars had obtained the body of a dead dog Joliffe and flung it down the well. The villagers immediately concluded that Jane's baby had died because she had drunk from the poisoned water from the well.

The burgesses and community of Bamburgh then sent a petition to King Richard II telling him of their grievances. It is not known what, if anything, the king did about it. 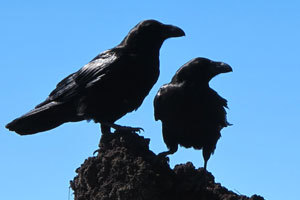 One day St Aidan, who was on one of the Farne Islands at the time, saw that Penda the Mercian King was besieging Bamburgh. His men had piled wood against the castle rock and set it on fire.

The flames were licking at the wooden walls of the castle. St Aidan said "Oh Lord, see what wicked Penda does". As he said this, the wind suddenly changed direction and drove the flames back on Penda and his men who gave up their attempt.

The Crows of Bamburgh

The Crows of Bamburgh (always referred to locally as crow although they are really rooks!). For many years there has been a large rookery in the Grove in the centre of the village.

It has been said the village will be no more if the crows leave Bamburgh. Please do not think too unkindly of them should they annoy you, for all our sakes!

The story of the Laidley Worm

The story of the Laidley Worm begins with King Ida the Flame bearer, an Anglo chieftain who was supposedly a descendant of the god Wooden. King Ida had a daughter, Margaret and a son, Child Wynd.

When Ida's wife died he became enchanted by a witch named Be hoc whom he married. His son left to seek adventure abroad, but the new Queen was jealous of Margaret, and cast a spell turning her into a dragon known as the Laidley Worm.

The worm curled itself around a nearby hill known as Spindlestone Heugh and terrorized the villagers to bring food to her cave.

Childe Wynd heard of his sisters disappearance, and of the dragon. He returned home to slay the creature but as he raised his sword, it spoke in his sister's voice asking for a kiss.

When he did so, the kiss returned her to a lady. He then confronted the Queen who somehow changed into a repulsive toad. The toad is said to crawl out of the castle's well every seven years, seeking revenge on innocent maidens.

One Easter day king Oswald and St Aidan were dining with a company in Bamburgh when one of his servants told the king that poor people had gathered outside hoping to get the scraps from their table.

On hearing this King Oswald gave the food from his plate and also had a plate, made of silver, broken into pieces to be distributed amongst the poor people.

On seeing this St Aidan seized the kings right hand and said "may this hand never decay". It is said that many years after the kings death his body was exhumed and it was found that his right arm was completely undecayed. It was put on view to worshippers but unfortunately his arm was stolen from Bamburgh at a later date.

A feud existed between the Foster and Fenwick families which had started over a will. In 1701 Ferdinando Foster while drinking a in a Newcastle tavern, quarreled with John Fenwick of Rock. The two men went outside to fight a duel. Ferdinand slipped and fell before he could drawn his sword, John Fenwick ran him through and killed him where he lay.

A month later John Fenwick was hanged for his crime. Ferdinando's gauntlets, breastplate and helmet can be seen hanging near the altar in St Aidan's Church.

The brother and sister Tom and Dorothy Foster lived for a time with their aunt in Bamburgh Hall. Tom became a general in the Jacobite army and fought in the 1715 rebellion.

He was captured at the battle of Preston and imprisoned in Newgate jail in London. His sister Dorothy set about saving him and apparently rode to London riding pillion behind the Adderstone blacksmith. Somehow she smuggled him out of jail, and he escaped to France.

It is believed Dorothy arranged a mock funeral for her brother in St Aidan's Church using a coffin filled with sawdust. He died in France in 1738 and his body was brought to Bamburgh for burial in the church crypt.